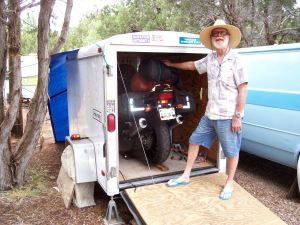 “Come on over to Conchas Lake State Park,” Dan shouted into my phone.

At least that’s what I thought he said.  His cellular phone wasn’t making the box very well and the conversation became a verbal game of anagrams.  John, another motorcycle friend from Arizona was winding up a visit with me.   A ride to New Mexico was the best news he’d heard all day.

The following day we rode out of McKinney and headed west on US 380.  The Texas sun bore down on us like a blacksmith’s anvil.  That plus a stiff headwind turned the trip into a marathon.  By the time the sun was two fingers above the horizon I’d had enough motorcycling for one day (my bike was a classic with no fairing) even though we were still in Texas.  The dude running a motel somewhere in the middle of nowhere wanted fifty bucks for a room.

John grumbled, but agreed the rent was a bit steep, so we pressed on in search of a better deal.

West Texas is not camper-friendly.  By sunset I was regretting having ridden away from that fifty dollar room.  However, we eventually found a gravel road leading into a vacated rock quarry.   Texans frown on uninvited guests.  Some visitors have even been shot.  We were taking a gigantic chance, but we rolled a quarter-mile back and put a rock pile between us and the highway.

By first light I was chilled to the bone and in dire need of hot coffee.  So we sped further west toward Floydada where we found Edward’s Café.

Edward, it turns out, is a Harley man.  He and a dozen of his friends go on group rides every chance they have.  This morning, however, was Edward’s day in the kitchen.  He’d spotted us parking and left the cooking to a waitress while he learned where we were from and where we were headed.   His interest was so keen I thought maybe he might spring for our breakfasts.  Oh well….

By lunchtime we were at Conchas Lake, New Mexico.  There was no sign of Dan.  The only hint of human activity was where someone hovering over the toilet hole had misjudged and left a calling card on the seat.  That did it.  We bought fuel and took Route 107 into the San Miguel Mountains.  With luck we would reach Las Vegas and Storrie Lake State Park before nightfall.

The sun was behind the trees by the time we reached the lake.  We found old friends, an Arizona couple, recreating on the lakeshore.  Dan, however, was among those missing.  He’d departed that very morning, heading in the direction from which we’d just come, and he would be at Ute Lake, our friends said.  After nearly a thousand miles with no windscreen, I was too weary to continue the chase.

Duty called and the following day I was up before dawn.  After loading my stuff I rode to a nearby McDonald’s and sipped coffee while awaiting full light before heading back into the San Miguel Mountains.

I reached Ute Lake early and traveled the parameter, but my search for Dan was fruitless.  After a time, I came upon a young fellow tying up his personal watercraft.

“Maybe you’ve seen Dan?” I ventured.  “He’s a blonde, blue-eyed man with far too much hair and a long blonde beard.  He looks kind of like Moses driving a blue van and pulling an enclosed trailer with a Honda Blackbird motorcycle inside.”

He looked at me and blinked.  “I’ve been here four days and I ain’t seen anything like that.”

This was too much. By this time I’d grown weary of the chase.  My leisurely mornings and an oatmeal breakfast on the patio was the finest thing I could think of at the moment.  With no further ado I grabbed a back road across the desert to I-40 and then headed east at a high rate of speed.  By dusk I was at home.

“Well, Conchas Lake was pretty vacant so I stopped there instead.  Sorry you missed me.  See you at Poncho Villa in November?”

“That’s a cold trip that late in autumn.  Barb and I will bring the pickup and camper,” I said.

We didn’t make it to Poncho Villa that November.  But Dan probably did…maybe.

Dan passed away at his home from natural causes in December 2012.  He was a loner up to the end and no one missed him for nearly a week.  I miss his phone calls.