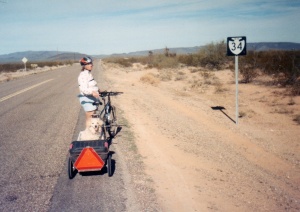 Barb and McBark pausing on Route 35 while

It was my impression that, after an hour we had the hang of this tandem cycling business. We’d been married for more than 30 years. What more could I possibly learn about this lady?

“Our cycling problems are behind us,” I stated as our salesman wrote out our receipt.

He paused in mid-sentence, looking first at me, then Barb. “There are things yet that you will learn, hence an old adage: Wherever a relationship is headed, it will arrive there more quickly on a tandem bicycle.”

Indeed, there were a few things – trust being near the top of the list, and tolerance not far behind.

We struggled along the back roads. Once, I failed to shift to a slower speed prior to a hill. We were just short of stalling when I decided to stop. Unfortunately, the pedal-cage had trapped my foot. It was still stuck when we fell over in the middle of the highway, causing a driver of a large Buick to squeal his tires (so much for earning trust that day).

Another time I accidentally squeezed the front brake. The gyroscopic force of the wheel reacting at 90 degrees to the applied force, yanked the handlebars from my grasp. The next instant we were both on our hands and knees in the roadway (no points that day either).

Our first trip to town was a learning experience. Our route took us down a hill of approximately 14% grade … with a traffic light midway. It never dawned on me that the stock wheel rim brakes were inadequate for such conditions. They chattered for a few seconds, and then faded. Fortunately, the motorist with the green light in their favor yielded as we sped through the red light. That was the day we bought a third brake, a drag brake, designed for mountain travel.

To make a long story shorter, Barb tolerated my errors for the initial 250 miles. During that period I learned to call out bumps and other surprises that lay in the roadway. From that point we became a team, accomplishing together what neither of us could achieve individually.

That was only the beginning.

2 thoughts on “Cycling Into The Sunset – part 3”