Time is elusive. It has no taste or smell. With the silence of a shadow it marches on, leaving its marks, some as bright as yesterday, others less so. Closing my eyes, I still picture the family farm and the people, my ancestors, I knew so many decades ago….

The local school, Greenview, is one-room located a mile north of the family farm, Tangle wood, Mom is determined that I shall receive a better education than it can offer. When she announces that she and I were moving to Butler, a larger town twenty miles distant, she meets a storm of resistance.

But Mom had anticipated this argument, and she digs her heels in. Tempers clashed, resulting in Grandma quoting a portion of As You Like It.

And this our life, exempt from public haunt,
Finds tongues in trees, books in running brooks,
Sermons in stones, and good in everything.
I would not change it.

Grandma was a school teacher, when the equivalent of a 10th grade education qualified a person to test for a teaching certificate. In May of 1910 she gave up her teaching, married Grandpa, and moved to Tanglewood Farm. In retrospect, regarding the Shakespeare extract, I wonder if it is a statement solidifying her Greenview-equivalent education more than her quality of life gleaned from some 60 years down on the farm.

It was a question that was never asked.

Mom follows through with her plans. I start the first grade in September 1943. Three months later we are celebrating the Christmas Season.

World War II is raging. I’ve just turned six, and though I don’t understand much of what is happening, I sense the wordless fear of my family and neighbors. But life goes on, and I focus on our list of rationed items. We can’t afford an automobile, so the rationing of tires and three gallons of gasoline has no direct bearing on me. Coffee, however, is a different matter. The conversations concerning it have piqued my curiosity. I nag Mom until she sometimes fixes me a cup. Of course, my cup of Java is seriously diluted. Without a doubt, I’m enjoying only the color.

Four of my uncles are serving in the Armed Forces. Uncle Glenn, one of the youngest, has written, advising her that he is coming home from Europe to celebrate Christmas with us. We await his arrival with great anticipation, she probably more so than I.

At last, the evening arrives. We hike the snowy mile to meet his Greyhound. The station is an anthill of activity – most in uniform – spilling into the parking lot and the highway. At last someone shouts that the Greyhound is in sight. A collective shout erupts and soon the driver is sounding his horn. People began shoving and I suffer a cigarette burn on the back of my hand before the coach came to a hissing stop in the parking lot.

A voice states that the bus was pulled from the boneyard and pressed back into service. Indeed, it appears well used, chipped paint, deep scratches, and fogged windows. The tires nearly matched my height. The front fenders extend over the tires. The headlamps are perched on vertical, stick-like rods, their yellowed beams vibrating in rhythm with the idling engine. 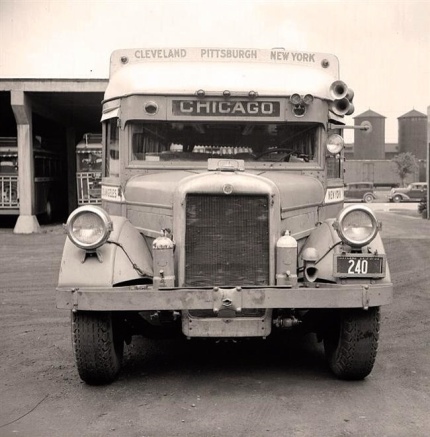 Somehow, Mom spots her brother in the crowd and soon we are plodding our way home, our faces smitten by the stinging sleet pellets. We’re chilled to the bone by the time we enter the living room, so Mom starts a pot of coffee.

Much to my disappointment, I’m served a cup of steaming cocoa.

“I don’t want cocoa. I want coffee,” I announce.

Mom and Uncle Glenn fell silent, their eyes fixed on me.

“We don’t get much cocoa in Europe,” Uncle Glenn announces after an extended pause. ” Trade you,” he adds.

Before I could consider his offer he switches cups and begins making loud slurping sounds while sipping my cocoa. His coffee doesn’t taste nearly as good as I expected, and after a few moment watching and listening I know he had pulled a fast one on me.

Of all the things he has brought with him, the Brownie camera interests me most. I’ve seen the family portraits and snapshots taken at reunions. They allow me to see how my relatives looked before I arrive on the scene. But these are the product of someone else’s effort, someone else’s camera. Uncle Glenn allows me to snap a few and I’m fascinated with the results after the drugstore owner develops and prints them for us.

Before many days pass Uncle Glenn’s furlough draws to a close. After walking him to the Greyhound station we wait in the street while he pushes his way to the ticket window and verifies his ticket. Because his has a roundtrip ticket and he is in uniform he automatically moves to the head of the line. He’s ready to step on the bus when he hesitates, reaches in his pocket and hands me his camera.

I experience a sense of loss after his bus vanishes into the winter night. I reflect on the newsreels we’ve watched at the Fisk Theater, our source of on-the-scene fighting in Europe. People are dying, lots of them. Though I don’t state the question aloud, I wonder if Uncle Glenn might be one of those unfortunate soldiers and I will never see him again.
First Grade

After Christmas vacation is over I return to the first grade. Evenings, after my homework is finished I pour over copies of National Geographic Magazine we’ve borrowed from Grandpa. Though I’m unable to grasp most of the text, I enjoy the pictures. I see them with different eyes after snapping a few of my own.

I wonder how people become photographers? Where do I have to go in order to be chosen to travel the world with my Brownie Camera? Being paid for snapping pictures of interesting scenes must be a fun job to have.

I’m deep in thought, considering these important questions of yesteryear when I’m momentarily interrupted by the clattering sound of the automatic ice maker. Ice makers haven’t always been a part of every kitchen, nor have refrigerators, for that matter. Instead, we had an iceman. 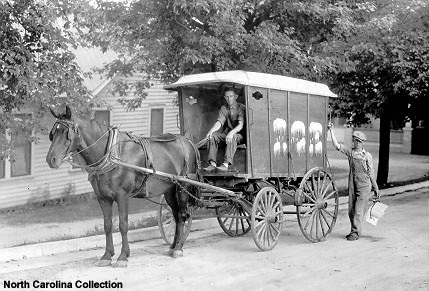 The iceman is perhaps the most trustworthy man in town. Not only is the back door always open to him, no one questions his charges for the ice he leaves in the icebox. Leaving one house, he crosses the side yard to the next and enters without knocking only to see how much ice is required. Then he returns to his wagon, lifts the flap, and selects a block of the proper size. As he starts for the house, his horse automatically pulls the wagon to the next home and awaits the iceman’s return.

Times were more difficult in those days, but at the same time they were more personal.

One thought on “First Grade”