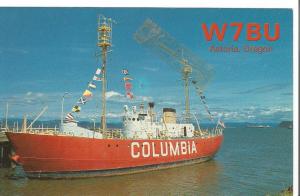 Radio Amateur Operators come in all sizes and from all walks of life. Senator Berry Goldwater was a ham. So was General Curtis LeMay. So the various activities one can participate in are almost endless. Of course everyone knows about making contacts and chatting with one another. Some or these contacts occur in Morse Code, some in Single Side Band, while other happen in more than a dozen digital modes requiring special computer programs, and knowledge. One of my favorite aspect is contacting Special Event Stations. There’s one for Route 66, another for Kitty Hawk, North Carolina, and the list goes on.

During the Indianapolis Motor Speedway Race a Special Event Station operates nearby from a location called the Brickyard. Most are conducted on Single Side Band (voice). After receiving a signal report, the operator’s name, location, and call sign we may send our own QSL Card along with an ASAP and receive a Brickyard card by return mail.

Another one, also an annual event, is contacting stations operating near lighthouses. They are located not only on all three coasts of the US, but on the Great Lakes as well, not to mention around the world. Not long ago I contacted the Columbia Light Ship that was for a long time anchored at the mouth of the Columbia River. Today, however, it’s part of the Maritime Museum located at Astoria, Oregon.

The operator had just come on 20-meters and I, sitting at home near Dallas, Texas, was the first ham to find him, so we had time for a short rag chew before the was a pileup, other stations waiting their turns.

“Is anyone operating on 40-meters?” I asked, thinking maybe I’d slip down there and monitor the activity, see if I might hear someone I knew.

“No, we can’t do 40. Right after the Astoria Amateur Radio Club acquired permission to operate from the ship’s radio room we loaded up the antenna for 40-meters, and called in the fire department instead of another operator. I guess we have the wrong filters installed? I’m not sure. What I do know is that the fire Marshall assured us if this happens again we were outta here. The word is: No 40-meters…, ever.”

We laughed and I signed. He issued a QRZ, indicating he was finished with me, and I heard a wall of noise. He repeated the last two letters of a call sign he’d heard and somebody from New Jersey took my place.

I’ve read a novel or two while awaiting my turn.