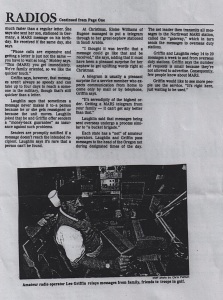 Communications between troops, their families, and loved ones has not always been as simple and quick as it is today. During the Second World War and Korea mail was sometimes opened, copied to microfilm, and then flown Stateside. Upon arrival the process was reversed and the letters were delivered to their destinations via the United States Postal Service.

During the Korean Conflict, and the Vietnam War radio communications had developed to the point were telephone-patches were often used. But, as you may know, the silence following a distant phone call is deafening. There is no substitute for cursive or printed words that a GI can read over and over.

The Military Affiliate Radio Service (MARS) was established in 1927. By the time the 1991 Gulf War began MARS – Air Force, Army, and Navy – were groups of highly trained traffic (message) handlers. Twenty-five word messages going to and coming from the Gulf were often initiated and delivered on the same day.

The Internet, as we know it, did not yet exist. Instead, there were a dozen of us scattered throughout Oregon – all 50 states, for that matter – gathered on assigned military frequencies, and participating in daily HF Single-Sideband Radio Networks. Using our person amateur transceivers and antennas, we moved messages to an appointed digital gateway station, which then passed them on to the East Coast for transmission to the Middle East.

As the ’91 Gulf War began we used a newspaper ad to explain what we were about and what we could do, and that the service was free, and we were open seven days each week.

My answering machine was usually chucked full of what parents, wives, and girlfriends wanted to say. Sometimes I would finish transposing these phone messages into 25-word MARS message by two the following morning, early enough to catch forty-winks before going back to my day job.

After the war was over MARS calculated that the dozen of us in Oregon had handled some 10,000 messages during those few short weeks. The newspaper clipping I’ve attached explains much of what we did. MARS management frowned on publicity, so I didn’t show up for the photo session.

I was 54 years old at the time, too old to serve actively in the military, though I would have returned as a maintainer, maintaining communications and navigation systems on B-52s and other combat aircraft, and done so in a heartbeat.

Of course, they didn’t call, but working through MARS proved we, as individuals are never too old to serve our country.