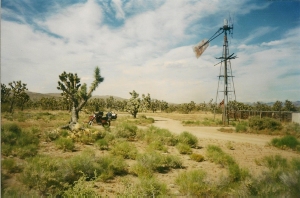 It may have been in April of ’02 when Barb and I were riding a 500 Thumper from Mexico to Eugene, Oregon, following Jeep roads and single tracks.

The motorcycle stalled out ten miles west of Searchlight, Nevada. The only way the situation could have been worse was for the engine to not run at all. It was getting far too much fuel.

I yanked the seat, and pulled the carburetor. After disassembled it I discovered the high-speed fuel jet had worked loose from vibration, and dropped out onto the floats. The extra weight opened the float valve, causing excess fuel flow to the manifold. It was a simple fix, but by the time I had it back together the sun was low. Not wanting to have another problem in the dark, we pitched our tent on horse turds in a deserted horse corral. 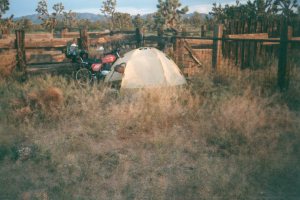 The ensuing thousand miles and eight days were fun-filled, and relatively uneventful.