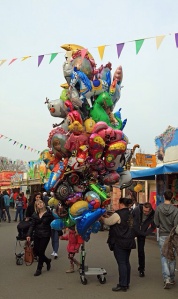 George was the used car sales manager at a Chevrolet Dealership. They sold their share of cars. Times were good. That is, until the people at Ford – a block north – began filling helium balloons, and stringing them on a long, stout cord reaching a height more than twice that of the power poles. Naturally, people noticed Ford first. Monday morning, after the weekend numbers were tabulated, the general manager told George he was going to have to do something.

By six o’clock the following morning, he’d secured his cord to a steel railing and then played it out along the sidewalk leading to the Ford Store. After attaching his cord to theirs, he cut theirs and then watched the balloons rise and head south.

Now they had balloons of their own.