The Continued Adventures of Dr. Rom

Dr. Rom continued as the scape goat for many things occurring in our area – a power substation going off-line, traffic lights going wacky. He was always number one suspect. Of course he held his own, claiming that he was teaching animal husbandry at Idaho State University.

The popularity of the Dr. Rom BBS exceeded all expectations of Dale and Tony, the co-sysops.

After a few months, and with the support of three BBSs – Dr. Rom, Comm-Line, and Bill Board DCBUG became nearly one-hundred strong. Monthly meetings were well attended where new members could participate in one-on-one help clinics, door prizes were given out, and program discs were sold. The first summer we even had a DCBUG Picnic.

Dale giving an overview of what DCBUG was all about

Dale, with a voice that could penetrate the four-inch armor plating on the USS Missouri was our MC.

I borrowed a chicken from a neighbor and took it to the picnic. After drawing two-inch squares on cardboard we sold the squares for fifty cents each. Then we placed the cardboard under the chicken’s cage and waited. Eventually, she would poop, and the person owning the square on which it landed won the pot.

He was a man of many voices, five of which I heard. 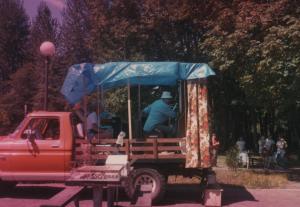 A behind-the-stage scene of Leo’s show. His wife, Tweedy,

is behind him handling the music and sound effects.

Perhaps most amusing of all was the incident involving Dr. Romm, a surgeon at the Eugene Sacred Heart Hospital. Tony was in recover, drifting in and out, when the PA speaker came to life: “Dr. Romm! Dr. Romm! Your assistance is required in operating room three.”

“For a minute he thought Dr. Rom had become more real than anyone realized,” Tony said.

2 thoughts on “Getting Here, The Rest Of The Story”