Sarah, one of our granddaughters, is into everything animals, especially reptiles. A couple of years back she and her boyfriend were rearing a herd of lizards and a young boa in an apartment, actually hatched out a few offspring. In the midst of this activity a neighbor set off a fire alarm and everyone was hustled into the winter street in their robes and whatnot.

Without a doubt, the project was being done on the sly until Chase, the boyfriend, asked a fireman who soon they could go back in because they “snakes and shit up there”. I didn’t learn the outcome of Chases’ announcement, but her fascination with the cold-blooded creatures is on the wane. All but one have either been re-homed or have perished, and her mother watches over Jack, as we have come to know him.

I’ve become better acquainted with Jack. This morning he was asleep, but when I spoke to him he quickly cocked his head to see if I’d brought him crickets, or if I was just wasting his time. I was doing the latter. So I took the opportunity to snap his likeness. 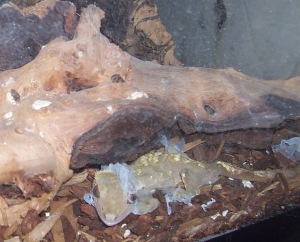 The gray filmy stuff on his head is his new wardrobe.

One thought on “At First It Was Creepy”