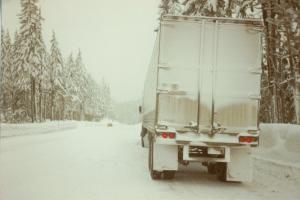 More than two decades have passed since I stopped making nightly journeys from Oregon’s Willamette Valley to Bend. The event took me over the Santiam Pass on the way and over the Willamette Summit Cascade Mountains on my way back. Tire chains and vacant roadways were part of the nightly ritual. Therefore, I was always eager for dawn to arrive, and bring with it some two-meter amateur radio activity. More often than not an elderly ham, I have yet to meet, interrupted the sound of the engine with my call. This morning was no exception

We passed a few minutes with idle talk, he at his kitchen table, me at the wheel of a gray Kenworth. There were twenty-four inches of fresh snow in his front yard, and he wanted to know if the accumulation along US 97 was similar. After I assured him that it was, he informed me that the repeater we were using belonged to him. For many years he had maintained it himself, but the passage of time had made it more difficult. Snowshoes enabled him to still reach the summit, but chores like replacing the coax were better left to a younger person. And that was what was going to occur within the hour.

“Benny is probably already on the hill waiting for me to shut my mouth. Meet me on five two, simplex,” he said, “I need to shut down the repeater.”

I waited several minutes before hearing his voice.

“Sometimes I really dislike these handy-scratchy radios and the itty-bitty buttons engineers put on them. It took three tries before I sent the right codes to the box, and shut it down.”

“Yeah. They’re made for little fingers. However, if it weren’t for that nifty little radio in your hand, you’d be headed up the hill on a snowmobile.”

“Ah! Think snowshoes! How quickly we forget. I retract my previous statement,” he said.

His signal was breaking up by this time, sounding like he was shouting through a picket fence. I could only imagine how rig sounded. We exchanged 73s while we could do so in a gentlemanly manner, and I continued my trek home. Tomorrow at dawn I would anticipate the sound of his voice.

One thought on “The Bygone Days of Snowshoes”