In response to The Daily Post’s writing prompt: “Handwritten.”

When was the last time you wrote something by hand? What was it?

When? This morning. Before dawn. I wrote in my journal on the patio where I was alone and it was quiet. 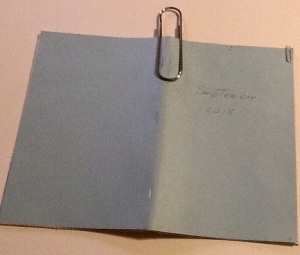 I’ve been keeping a handwritten daily journal for the past twenty plus years. It’s my method for staving off overload. I generally start a new journal the first day each month. Why? Because I have a lot of paper that needs to have a purpose, and it is getting in the way. Besides, it makes this entire journaling business as personal as a handcrafted cup for my morning coffee. I own it. 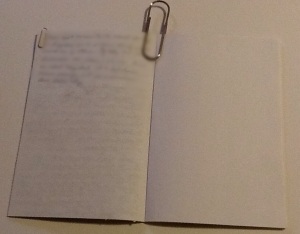 This paper business began nearly thirty years ago when I started publishing QNC! The CW Journal as a Quarterly Forum, hardcopy.

It was a place to share ideas, blow our own horns, pound our chests, and learn. A Commodore 64, a dot matrix printer, a membership to a worldwide telephone message relay system called FIDO, a membership to the American Morse Club, and the United States Postal Service made up the physical core of this endeavor. Everything else was words and hand-drawn illustrations reproduced on paper at a nearby Kinko store. Long story short, $7.75 bought a membership to this one-man show that was represented in Africa, Europe, UK, Australia, Canada, and of course, most states in the USA.

There was no Internet when this project was started, but ten years down the road Yahoo and Yahoo Groups became a reality. But because “!” was reserved, a pro-word in the radio world, I had to drop the explanation point and it became QNC, which created a new problem. QNC in Morse code portion of ham radio is an official Q-Signal used to announce the transmission of a bulletin, meaning All Stations Copy. This new name was frowned upon by the powers that be…so what else is new? But back to cursive writing.

Tractor paper fell out of favor a few years back and I’m still stumbling over nearly ten thousand sheets. Anyone in their right mind would probably cart them off to some recycling center. Me? I decided I should use them in some more creative manner – creating personal journals. Separating fifteen sheets each month, and using my long-John stapler, and a 80 pound sheet for a cover provides me with a fresh, 60-page journal each month.

But it’s like some of the meds I see advertised on television. This isn’t for everyone.