In response to The Daily Post’s writing prompt: “Right to Brag.” 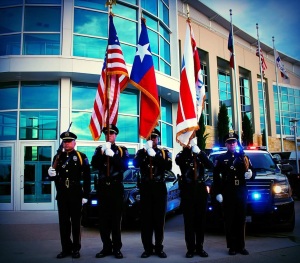 My Grandson, A Member of the City Color Guard,

Tell us about something you (or a person close to you) have done recently (or not so recently) that has made you really, unabashedly proud.

One of my grandsons has earned the right to hear his grandfather rave on his accomplishments.

Because of an interest in law enforcement during his high school years, and accompanied officers on weekends, he managed to hire on as the city jailer. Being a city employee qualified him to attend the University of Texas at the city’s expense.

Five years later he earned his degree, and then graduated the Texas Police Academy at Dallas. After a year as a city police officer he was selected to train for the K-9 unit, issued a special dog and a vehicle.

7 thoughts on “The Right To Brag”