During the summer months of 2005 Barb and I hosted the Bristle Head Campground on the crest of the Colorado Rockies at an altitude of 10,900 feet. That was where we met William Anderson – a cowboy if I ever saw one – who told us grazing rights had already been paid to the powers the powers that be.

Anderson estimated about 1200 head in all were being trucked up the Silver Thread Highway from New Mexico and the Arizona Strip. I could believe it after seeing the trucks. I lost count after 20.

The exact day they would be moved the final 15 miles to Bristol Head was not decided when we drove the 20 miles to Creede for groceries. But someone gave the nod while we were gone.

The photos don’t look like 1200 cows, but had you been there you would have seen the big  picture. We did. We followed in their tracks for three hours. 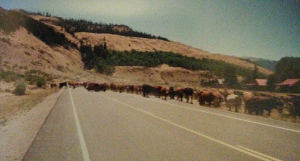