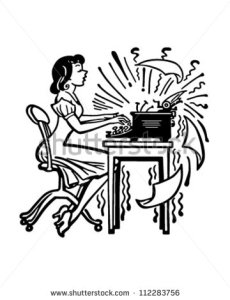 Illustration from the Internet

Phillis Publisher, the daughter of a train agent, had heard and copied American Morse code since she was old enough to spend time with her dad at the Southern Pacific depot. She soon earned a reputation among the many code operators. Like the fastest gun in town, there were those who  challenged her and lost. She even gave them their choice of telegraph keys – Vibroplex or J-38 but they still lost.

So in June of 1938 when she hired on as bookkeeper for Creswell Cartage, Delbert, the owner of the trucking company, installed a direct line to Western Union. She became the lifeline. In the interest of simplicity, she always signed her messages as Phil.

The job became routine, that is until the morning of December 7, 1941. Several of the younger drivers who were not yet married left that very day to enlist in the military. Within weeks the draft board began drafting personnel. By April 1942 the company workforce had shrunk from twenty-two to four employees – Phillis, Delbert, and two drivers George and Mike, who were in their late fifties, beyond draft age..

One would think that such a downsize would make Phillis’s job easier.

As people answered Uncle Sam’s call many ladies who were unmarried or without children relocated to the larger locals and to take jobs in defense plants. But Phillis stayed with Delbert, taking on the draftees jobs – paymaster, receptionist, secretary, dispatcher, in addition to the jobs she was hired to do.. And one day each week, she was the claims adjuster. With a company checkbook in her pocket she drove to their customer’s offices and settled up on the spot.

Her life was a busy life.

She’d had worked for Delbert for more than eight years when the war ended and the hired help came drifting back from the war to reclaim their jobs.

After so many years of being Phil-on-the-wire sending and receiving American Morse communications nearly every trucking company and railway agent on the west coast recognized the name Phil, not personally, but by the signature they received.

The post war era brought good times. Creswell Cartage expanded, opening an office in Seattle. And on its heels the old American Morse system was replaced with the newer, faster teletype systems. The instruction manual suggested that operators should coin a four-letter word as their personal signature. No problem for Phillis there.

Jackson, the Seattle communications manager, was a new hire and he took the signature Jack. He was a greenhorn, and because she was so well-known he always contacting Phil via teletype for advice on how to handle different problems. Eventually, a friendship developed. They sometimes keyboarded back and forth, chatting – where they lived, how long they’d been married, their hobbies. But the subject of gender was never addressed. In all those years with the trucking company gender had never mattered.

After a few months Jack sent a message announcing he was transferring to San Francisco to help open a new office on the bay. En route, he would be passing through town on the 12th of the following month. Maybe they could have lunch?

Phillis had a dental appointment at three o’clock on that very day, so she spiffed up more than she would for a regular workday – a touch of makeup, heels, a colorful skirt, earrings..

True to his word Jack walked into the office about noon on the 12th.

“May I help you?” Phillis asked as he approached her desk, not realizing she was speaking to Jack She knew him only by words printed on the yellow telegraph paper roll. She’d never seen his picture, nor heard his voice.

“I’m Jack. I’m here to see Phil,” Jack said, gazing around the room as if Phil might be nearby..

He stiffened and stared at her for a moment, then turned on his heel and left without another word.

Several weeks passed before there was a message from him. And when it came it was strictly business, no chitchat.