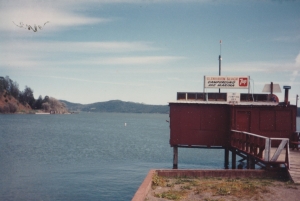 Barb and I headed south from Oregon on an unscheduled vacation. She was in desperate need of time off.

Short on cash, we’d brought our tent and headed into California. About 40 miles north of Sacramento we hung a right on SR 20 and crossed over the Coast Range Mountains. Eventually, we arrived at Clear Lake and pitched our tent on the lake shore near the pier leading to what appeared to be a dandy party place.

Toward evening couples began arriving and made their way out there.

It was a party place. People were soon rip-roaring drunk. After a couple of hours we left and discovered a tent had been erected next out ours during our absence.

After midnight the owners of the tent next door awakened us with an abundance of physical activity accompanied by loud  moaning.

The following morning we were already up and preparing breakfast when the couple next door emerged from their tent. The man disappeared somewhere while the woman began carefully folding, rolling, and packing their things. In the midst of her labor stopped and looked up. We made eye contact.

I smiled and winked.

She froze for an instant. Then, in a flurry of activity she grabbed their stuff and threw it wholesale into their car and drove away.

The party was over.