With air force travel orders in his pocket, Joe was thumbing it from McGuire AFB, New Jersey , near Trenton to Travis AFB, California near San Francisco. He knew the powers that be frowned on hitchhiking, but it didn’t take any smarts to figure how much money he’d save thumbing. He might even make some. Jack Kerouac wrote a book On The Road. Hell, any fourth grader could write that good. So he’d went for it.

He made pretty good time. But when he was calculating travel expenses the cost of food had never crossed his mind, nor renting rooms along the way. By the fourth day he was exhausted and his supply of folding money was running short.

Standing at the roadside near Little America, Wyoming he heard a train whistle. Alright, he thought to himself, he probably had enough cash to ride a train into California. There was a bonus – he could sleep part of the way.

Climbing over the right-of-way fence, he walked around switch yard until he found a skinny fellow wearing a conductor’s cap.

“You got a train going to San Francisco?”

“Yeah, as a matter of fact that there orange one will be heading thataway directly.”

Joe beat feet to have a look. It looked pretty old. Probably should have been in a museum, but it could make it to San Francisco he didn’t care. After Joe climbed aboard, the skinny conductor wrote a ticket and then  went about his business while Joe relaxed for the first time in nearly a week.

“Where are we?“ Joe asked, peering out the window of his coach. 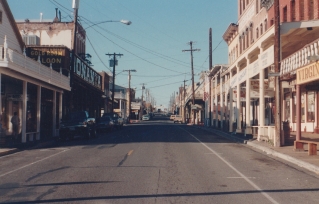 “Virginia City? The guy where I got on told me the orange train went to San Francisco. My ticket even says San Francisco. What the hell is going on here?”

“Aw hell. That’s Sam. He’s color blind. He’s always getting his reds and oranges mixed up. You’re not the first one he’s done this to. Set tight. There’s an ore train headed to Sacramento day after tomorrow. I’ll get you a place in the caboose.”

Joe just looked at him.

“Don’t worry. I’ll refund your ticket. That’ll get you some seed money for the slots. Maybe you’ll get lucky.”