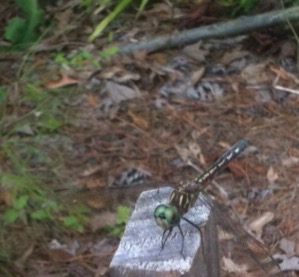 After posting this photo yesterday I found he was still on duty after sunset. Barb thought maybe he was standing guard over a nest or his home territory. Just before dark a storm front moved through with several violent  micro bursts occurred. I wondered about this guy. How did he manage? Did he remain on his post like those soldiers at the Tomb of the Unknown Soldier?

I went out with a light about 10 o’clock and found his post deserted. Did he perish, or when push came to shove was it every bug for himself?

Evidently he exercises some survival skills I’m not aware of, because this morning he was back.

3 thoughts on “A Fearless Bug Revisited”