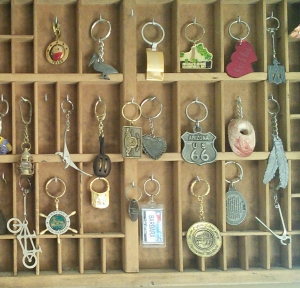 During our younger years – not our youth – Barb and I were serious bicycle riders – tandem cyclists.

We thought switching from a “half-bike” to a tandem would be as simple as climbing on and pedaling away.

But that’s another story.

Tandem cycling redefines the term cooperation. We labored more than 250 miles before we both got the hang of it and could work in unison. After that we could accomplish together what neither of us could do alone on a single bike.

After retirement we had time. In our travels key chains caught her fancy. They were light and with each one came a memory.

The silver bicycle-built-for-two came from an Oregon tandem bicycle rally.

The Route 66 came from Williams, Arizona.

The miniature pulley came from a marine museum on the Oregon Coast.

The round gold pan like medallion is from the Laura Ingles home where “Little House On The Prairie” was written in Mansfield, Missouri.

The red, joined heats have our names engraved and were given to her by one of our daughters.

The eagle to the right came from the Petrified Forest.

In the upper left corner is Texas, of course.

2 thoughts on “Bicycles and Key Chains”