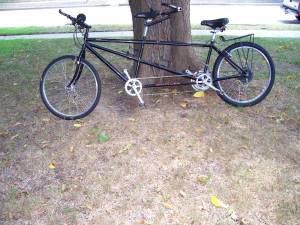 Barb and I were serious couch potatoes, and we weren’t sure what we should do about it. Walking was okay, but cycling had more appeal. After some discussion I went to the barn and retrieved our two old bikes – a Sears 10-speed Free Spirit, the other a 3-speed British Dunalt we’d brought back from the West Indies. Both had flat tires, loose spokes, and rusty chains. So off they went to the bicycle shop for whatever repair they required.

A week later we were pedaling about. However, as our destinations grew more distant, Barb‘s interest waned. We talked about owning a tandem. After a few days of discussing what we could afford I searched the yellow pages for a dealer. Collin’s Cycles considered themselves the local tandem experts, so I gave them a ring.

“Indeed! We are the experts,” boasted Tom, the manager.

Collin’s Cycle Shop had evidently occupied its present location for decades. The show windows displayed a few colorful bikes, but nothing we saw from the outside prepared us for what we found on the inside.

The scent of lubricating oils, tires, and plastic resins greeted us as we opened the door. The wooden floors squeaking beneath our weight reminded us of our bygone schoolhouse days. A quilting store could not have displayed more color than we saw here. Every nook and cranny was filled with bikes, clothing, helmets, shirts, jackets, and cycling shoes. Further back three mechanics trued wheels, adjusted shifters, and assembled newly arrived bikes. Tom left his project and met us midway.

In his mid-20s, he was the picture of a true athlete. After a brief tandem education he ushered us to his display. Each bike stood against a vertical support, its tires resting in a horizontal trough. They were in Latin motus, poetry in motion. We wanted one, but the cost was astounding.

“We are talking bicycles here, aren’t we?” I asked Tom, my eyes nailed to the four digit tag.

“Folks, quality and economy seldom travel together. Engineering and skilled workmanship are the trademark this Burley line. Check this weld,” he said, encouraging me to place a finger where the top bar joined the steering head.

I assured him we weren’t shelling out that kind of cash for a bike. Undaunted, he insisted we take for a spin since we were already there, and pointed to an alley two doors west of his store.

We gave it a shot, but Barb was not happy with my having total control. I had the brakes, the shifter, and the steering. Trust was all she had. After wobbling twenty yards along the alley we climbed off and pushed it back to the store.

He was disappointed. But he had our phone number.

A couple of weeks passed before he called to tell us he’d received a new shipment of tandems. Perhaps we might like to drop by some afternoon and “kick the tires,” so to speak.