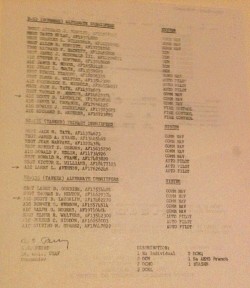 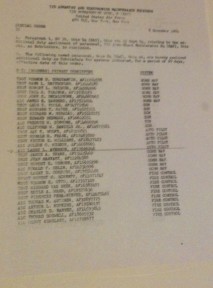 In 1964, while stationed at Ramey AFB, Puerto Rico, I was a flight crew debriefer. That meant that I met the flight crews, mainly the navigators of both KC-135 and B-52 aircraft immediately after their return from a flight. My job was to ask questions and take notes regarding equipment failures during flight and pick their brains for details – how long after take off the problem occurred, what they did to try to correct the malfunction, any details they could share that might help in correction action.

There was always chatter between the crew members, discussing things there hadn’t been time to discuss while airborne.

One particular time a tanker crew was in the debriefing room. The navigator, a major, was an old guy, a World War II bombardier who had served over Europe on a B-17. I come to know him well over the three years I served as debriefer and I enjoyed his many colorful stories.

The time in question, about 0300 hours one morning they returned from their mission, supporting a B-52, transporting fuel. The mobile bomb target was on a train somewhere in Montana. The bomber they were assigned to refuel had aborted and they were instructed to stay in the area in case of an emergency.

During a lull of bombers running the target the old navigator suggested they run the target. He didn’t have the bells and whistles the bomber crew had – no electronic offset, no joystick, no 14” radar scope. He had to rely on the aircraft commander to fly where he told him to fly, and for the simulated bomb drop he had to use his microphone switch on the floor to squawk the target.

He scored something under a thousand feet and when they cleared the site they were asked to identify the tail number, type of aircraft, aircraft commander’s name and rank, and the same for the navigator.

When the ground crew learned the details the entire crew went on report. I never heard how long they were grounded.