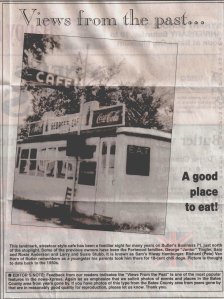 One day, as the story went, the cowboy asked Bob’s mom if she’d like to own the Streetcar Diner.
He didn’t learn how long they finagled over the terms, because he was in school. But in the end she was the owner and at long last Bob got a chance to see inside.
The place is filled with customers when he follows his mom into the diner, letting the spring-loaded door slam behind him while his eyes searched for the jukebox that’s belting the song Don’t Fence Me In. His main point of interest was the jukebox he’d been hearing from the locker plant,so he might not have noticed had the cash register directly ahead had there not been a customer paying and the shrill sound of the bell cutting through the music as the cash drawer opens. As he follows his mother to the right he notices the counter extends north far enough to accommodate a dozen stools. Then he spotted the infamous jukebox, its colorful neon tubes engulfing the entire end of the coach .
73 de Scott, N7NET http://n7net.mehttp://qncw.me