Building a radio station from scratch is involves more planning and work than meets the eye. My friend, Bill, has demonstrated this in the  a series of articles that  follow. 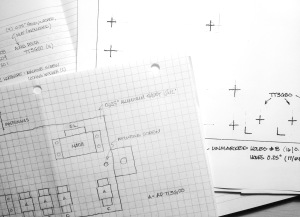 I need an entrance panel for my antenna feeds. Snaking them through a partially open basement window isn’t working out so well. I look over the ready-made options and decide to design and build my own. What I come up with will work electrically but I have a problem: I have no idea how to bolt it all together.

Figuring that out involves a notebook, one 6×12 inch sheet of aluminum and a pile of lightning suppressors, all of which are on my desk, next to the keyboard. I’ve been doing this for a while; it’s a hard problem. A bigger piece of aluminum would be better but won’t fit in the space I have, the components are oddly shaped and the whole thing has to go together in a way that allows me to easily attach and route cables. Every once in a while, I re-arrange the pile, make a quick sketch and write another note.

The notebook is a product of Mr. Sivak, my junior high school science teacher. To get a passing grade, our notebooks had to formatted in a certain way and include certain stuff: the hypothesis, lab setup, initial conditions, experiment protocol, and results. There was, being high school, a lot of grumbling in the ranks. More writing? More rules? More stuff that I will never use again? Me? My resistance faded when I figured out that keeping records of my experiments enabled me to understand why things worked the way they did.

In science class, the notebook trained me to capture information in a way that made it useful. It also taught me cause-and-effect: I did this and that happened. As a vo-tech student, it cut down on the number of times I made the same mistake.

Later when I was learning electronics on a tube trainer rack made up of a pre-built plug-ins – power supplies, amplifiers, oscillators and such – I used a lab notebook to keep track of my choices. Recording what I did mattered because passing the class involved (a) developing a  design by the deadline and (b) not letting the smoke out of the same type of plug-in twice while doing so.

In the years that followed I filled a lot more notebooks. I stopped doing engineering bench work, but I kept using lab notebooks. Whatever name I used for them, the essential components – initial conditions, hypothesis, setup, protocol and results – that made up my high school lab notebook didn’t change. Whether I was building or managing or monitoring, whether it was a new product or a new company, using this format to guide my decisions simply made whatever I was doing turn out better. The notebooks of my professional career helped me develop, test and, most importantly, assess and tune good solutions to complex problems, which is what I got paid to do.

Today, I am on the eleventh arrangement of the panel. I have solved a couple of problems that I didn’t know I had when I started. I notice that the difference between the tenth and eleventh versions is pretty small, so I probably have a design that meets my goals. But if I build it and find a new problem, the next version can skip past all the designs I have already tried and rejected. The sketching and note taking added about an hour to the process. From past experience, I am certain that hour will save me from having a, “wish I had thought of that before I started drilling” moment, and rework or starting over, later.

I decide to try one more arrangement of the panel. It looks familiar. Reviewing my notes, I see it’s a repeat. But flipping one of the components around solves a spacing problem that’s stumped me until now.

Finished! I make one last sketch. Later I will use some LMR400 coax I have (my worst case scenario) to make sure my cabling assumptions are okay. Finally, I will dimension the components and make a drawing that will serve as the panel’s drilling template.

After measuring each of the components and making the drill template, I make a final parts list so I know what I need from the hardware store. It will take just an hour or two to drill the aluminum and assemble the panel. With all the arranging and sketching, I am confident that my cabling problem is solved, I’ve addressed the lightning and static charge problems, and I have a way to review my design choices if I want to make changes. Not a bad day’s work.

Why should hams bother with lab notebooks? It’s a hobby. Diplomas, promotions and stock certificates do not hang in the balance. An hour writing is an hour not devoted to making contacts. But anyone who has invested days in building an improvised piece of gear that doesn’t work or fit or last knows my answer: I suck at making things up on the fly. Every hour of designing, paper testing and documenting saves me two or four or more hours of rework later. And six months later, when I don’t remember why I made the choices I made – whether it is an antenna setup or homebrew balun or the way I configured my radio – my notebook has me covered.