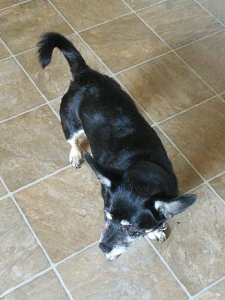 I’ve often heard references to multitasking, and that it’s a common belief that women are more skilled at it than men. I suppose child rearing makes multitasking a necessity. But in all this discussion I don’t recall any reference to the animals with whom we share this planet – our pets, for instance.

Yesterday, while my dog, Mr. Black, and I were engaged in our morning constitutional he paused in a grassy area to relieve himself. Midway through his “job” a neighborhood cat appeared. The dog’s ears moved, nothing more. The two are well acquainted, and the intruder read more into the ear movement than did I. Quite sure of himself, he settled into a comfortable cat-posture to waiting mode.

When the task was complete Mr. Black hit the end of his leash like a cannonball, but not before the cat had vanished into a nearby hedge.
Mr. Black is a male. Therefore, his multitasking skills may be lacking. Had he been a Ms. Black would the confrontation ended differently?