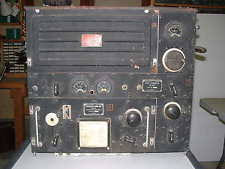 Not the same transmitter, but close.

Dave, was my father’s age, and a casual friend. We often met at the Braille Cafe for lunch. Dave was a Scotsman. He was forever telling me about the Scottish Clans and “slinging the haggis”. In time, the conversation always turned to radio, rehashing his experiences in the Army Signal Corps during World War II.

While we chatted another mutual friend, Pete, joined us. He, too, was a long-time ham, long enough to recall the government taking away the amateur radio bands during World War Two. And then the two of them urged me to earn my novice license.

“The theory is okay, but Morse code is difficult for me,” I complained.

“That’s what make Morse unique. It is difficult to learn. It’s not like someone overhearing a telephone conversation. Few understand the exchange.

Between the two of them, I caved. The following evening I dropped by Dave’s radio shack where he made a practice tape, dits and dahs at a very slow speed.

Two weeks later, the three of us gathered at Dave’s dinner table where they administered an ARRL approved test. An hour later, scoring with a passing grade on both theory and code, I was admitted to the ranks as an amateur radio operator. Of course, I enjoyed limited privileges – power output not to exceed 250 Watts, Morse only on portions of the 80-, 40-, 15-, and 10-meter bands. Actually, a very small segment of 10-meter allowed a novice to operate on single sideband. But I didn’t own a transmitter, so 10-meter or no, it made little difference to me.

Do you own a receiver?” asked Dave after we were finished.

“How about a transmitter?”

He said nothing more, but as I was leaving he followed me to the driveway and then asked me to wait. A few minutes later he reappeared pushing a hand truck bearing a transmitter the size of a foot locker.

“This transmitter is from a World War II battleship and in its original condition. You will have to convert the input power over to 117 VAC. It’s still set for military frequencies. You will have to figure out how to make it work on the ham bands. It’s yours, if you want it. You’ll have to take the hand truck too. It’s heavy.

I turned him down. And now, after thirty years have passed, I realize the historical value of the transmitter Dave was offering me.

The realization came after my contact with a retired coast guard radio operator and reading experiences this man shared while he operated a powerful land based radio.

In one instance he received a distress call from a ship that was sinking. After learning his coordinates he put out a call for any ship that could come to the rescue. He found one that could be on the scene in four hours.

“How long do we have?” the coast guardsmen asked.

“There was nothing more could be done, so I stayed on frequency with him, chatting and taking personal message to family members and friends. I stayed with him until the radio room was flooded.”

I wondered if that transmitter resembled the one Dave offered me.

The only possible answer was to visit The USS Lexington which is open to the public at Corpus Christi,Texas. The Lexington manager responded to my email, informing me the radio room was not part of the tour.

Philip, the editor of K9YA Telegrah, a Chicago Radio Publication, authorised me to visit the USS Lexington on the Telegraph’s behalf. Their response was positive. They would provide an escort.

Three tall ladders stood between the hanger deck and the radio room. The only thing my escort knew about the radio room was where to find the door key and the light switch.

The room measured about eight by fourteen feet. Though the radios had long since been removed there was a panel in which about one hundred phone Jacks were mounted. Each jack was accompanied by a frequency. My escort couldn’t tell me the purpose, so I still don’t know if each jack provided a specific notch filter for that frequency, or what.

While there I searched for an exit. There was only one way out – the way I had come in. A sobering conclusion.

The radio operator is the last hope for a sinking ship. Is he obligated like the captain? I’m asking.