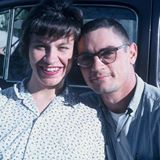 Those were the words spoken by a relative referencing my wife’s condition. A year ago last May she’d suffered two heart attacks and two seizures and our future seemed grim. I think he is a selfish, greedy man. I fear he let his wife go a few years earlier in order to collect a large insurance policy. So I wonder what he is suggesting; turn my back on my wife and give up on her?

My mind drifts back to Barb’s 27 days in a heart hospital. Her survival is touch and go, more so than I realize. Not until I hear her monitor sounding off like an aircraft stall-warning horn do I truly understand how close to death she actually is. “We still have other things we can do,”a nurse says to me as she quickly connects two smaller, brightly colored gas bottles to Barb’s machine. Nothing they do prevents her oxygen level from dropping. It’s now approaching 20%. I don’t know what percentage is acceptable, but I’m certain it should be higher.

I watch Barb while trying to stay out from under foot. Her lips move. Glancing at the nurses I notice they are all four leaning against the wall. Is there nothing more they can do? Are they waiting for her to die?

I move to her bedside and pull her oxygen mask away and ask what she said.

“I can’t take any more of this,” she whispers.

My medical knowledge includes the use of band-aids and administering cough syrup. Little else. However, my gut instinct tells me the words I chose during the next sixty seconds may determine Barb’s future. Putting her oxygen mask back in place, I bend over and whisper in her ear: “Please don’t go. I don’t want to home alone.”

Before the second hand on the wall clock has finished a full rotation her oxygen level moves. It increases. Did I cause that, Or would it have happened anyway, even if I’d been somewhere else? Within an hour the oxygen crisis seems less critical.

Twenty seven days later, fitted her doctor says I can take her home. “bear in mind,” he tells me in the hallway, “She’s been through a lot. Don’t be surprised if some mental issues surface.” Before she leaves her room, a nurse brings a box containing nine medications and an instruction sheet indicating what these meds are and when they are to be administered. The assigned hours are: 7AM, 9AM, NOON, 5PM, 8PM, and BEDTIME.

I’m overwhelmed, not at all certain I’m smart enough to keep my wife alive. But unlike my calloused relative, I don’t throw my hands in the air and leave Barb’s future to Lady Luck.

For several weeks I cook, wash dishes, wash clothes, and keep house, and see to most of her needs while she gazes out the sliding glass door. Eventually, she’s able focus better. We play slow games like Monopoly and Rummy.

I wonder about computer games. For years prior, she has played a Simms game on her iPad. Now she has no interest. None. Her stress level is low, so don’t press it. Instead, I wait and I watch and I hope – keeping the iPad battery charged. One day she asked if I know where she put her iPad.

Seventeen months have passed since she came home from the hospital. During this span of time her health has steadily improved. There have been issues, but she has taken over the domestic chores, but stress is still a constant snag caused by television and radio. Those are easily addressed.

This month she announces she is going to begin embroidering. A week later she’s ready to start a second pillowcase.

My relative becomes more like Scrooge McDuck with each passing year. He was wrong, saying: “She will never get better.”

2 thoughts on “She Won’t Get Any Better”