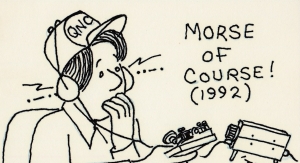 My Nexus 7 tablet supports a dictionary app that publishes a word and definition each day. I’m subscribed to this feature in an effort to enlarge my vocabulary. Most words it offers are beyond what might be useful in my daily life, so I scroll on by. This morning, however, came the word: MACARONIC. This describes at least two instances where I could have used it.

Spanglish is one. During a three-year tour in the West Indies I experienced a language collision, a conflict between English and Spanish. It was most apparent with the children who enjoyed both languages, interchanging at will and with ease.

Box-car-ing is the second one which involves the use of Morse code – American and International.

Thirty years ago, while earning my amateur radio license I was required to demonstrate my knowledge and use of international Morse code. In doing so I rubbed shoulders with retired railroad and Western Union communications operators. Many of these folks had sent and received information of great importance – sinking of the Titanic, World War I, the stock market crash of 1929, The Great Depression, World War II, and many other events of great importance. The telegraph wires sang with train orders, personal telegrams, news, stock market reports. The list could go on.

During my early hamming days when code was the only mode I was allowed to use, I rubbed elbows with these “old salts” folks who even thought and dreamed in code. One of the places where macaronic occurred was on the West Coast Slow Speed Net which met daily on 3.702 mHz at 0200 hours Zulu.

These folks were quick with their Vibroplex and straight keys. Hardly a night passed without one train dispatcher passing traffic to another. When conditions were difficult and the receiving station sometimes asked for fills. The sender, in his excitement, sometimes mixed American Morse with International leaving us newcomers scratching our heads..

They called that box-car-ing. The dictionary calls it macaronic.